A followup to Wolverine claws.

My parents quickly became aware of my creation (that is to say, I told them about it, and they had helped out with a couple of things) and they insisted that “Wolverine” make a similar appearance at Dad's 60th birthday party. The theme of this party was different, but it was craftily crafted (the best kind of crafting) so that my costume would still fit. 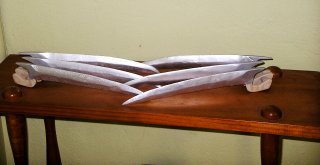 Now, the thing is, honestly, the claws barely lasted the party they were originally created for. The blocks between each claws were coming apart, and so I had retired the claws to ornamental duty.

But my parents insisted, so I had to bring them out of retirement. To fix the problem of the loose connections between claws, Dad got his fibreglassing epoxy goo and plastered around the blocks to reinforce them. There was a bit of a problem, though, that after the epoxy set the claws were too close together in a couple of spots. A bit of sanding into the wood with a Dremel fixed that, but it also further weakened the structural integrity of the claws.

The claws were worn again for the party, and they worked well. Not as many people picked me this time as last, unfortunately—perhaps it was because the theme was a bit broader than last time, perhaps it was my more subdued sideburns (I didn't have time to grow them fully, not was I as inclined to as the first time), or perhaps it was just a different demographic. Probably all the above.

So, there're my Wolverine claws. They're now resting on top of my bookshelf, with fibreglass epoxy addition, living the ornamental life. I'll be surprised if I ever have an occasion to wear them again. How many times can a person go to a function dressed as Wolverine, anyway? (Assuming you aren't actually Wolverine, obviously...)